This is the story of how I became the Space Painter. I think of it as a story about teachers. One day three friends and I were practicing a beautiful and intricate juggling pattern that we called the 14-club-clockwork trick. It involved the four of us passing clubs high in the air. 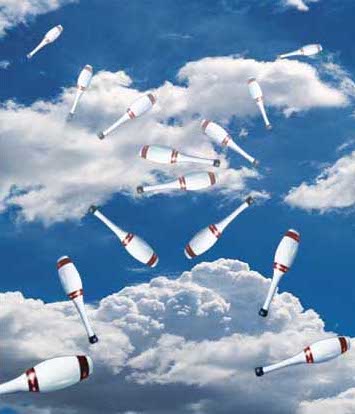 While we were doing this, a little boy came over to us. He was 2 years old and dressed in hiking boots and a diaper, and nothing else. It was summer. I’m pretty sure it was a full diaper.

The boy looked up at the 14-club-clockwork trick. He pointed a finger at it and said, “painting space, painting space.”

At first I had no clue what he was talking about, but then I understood.  He was describing juggling. He did not know that word—juggling.  He only knew what he was seeing, and to him it looked like painting space.

Ever since, I have loved the idea of juggling as painting space. This happened more than 40 years ago. But, it is why I call myself the Space Painter, something I learned from a 2 year old with a full diaper.

We can learn from anyone…If we listen.